Ken Follet’s magnum opus has, to my mind, never been equaled in his writings before and since. Here’s a book that has it all – history, politics, love, hate, treachery, bloodshed, sex, altruism, arrogance, self-sacrifice, culture and a gorgeously detailed world that seems complete in all its details – it invites comparisons to other completely described mental and physical worlds, like, oh, Gone With the Wind, or Pride and Prejudice, or Hogwarts.

That said, it’s a little difficult to summarize in a few sentences for a review (and I don’t think I’ll try). Pillars is a bildungsroman covering many decades in the lives of a few main protagonists during the tumultuous 12th century in England: Phillip the prior, Aliena the lord’s daughter, Jack the over-intelligent boy, Hamleigh the oafish and brutal bad guy, and a host of other major and minor characters: Ellen, Tom Builder, Alfred, Regan, Waleran Bigod and on and on.  The novel charts their evolution in the priory of Kingsbridge by linking them all to the vainglorious project of building a huge cathedral, at once symbolic of their own growth, and that of the country (and the church).  And while it ends with the murder of Thomas Beckett, the archbishop of Canterbury, this is more a digression and an add-on than an organic part of the overall story we are invested in, which is the triumph of good or evil, and the concept that if you have faith and courage and strength of will, then anything can be accomplished.

Summarizing the plot of this massive, sprawling book would be meaningless.  Easy threads to follow are Tom Builder’s construction of the Kingsbridge cathedral; Aliena’s rape and subsequent rising above her tragedy via commerce, and her love for Jack; Phillip’s continual attempts to thwart Waleran Bigod’s venal ambitions and underhand methods of attaining power; and Jack’s growth and maturity and development.  But at end, this is less than even these people and turbulent historical times alive with ferment and change, and rather about the complex world in which they move and exist and love and die. Follet is not as detailed a factual writer as, say Crichton, whose taut “Timeline” held much more information in a smaller space – but he succeeds where Crichton does not, in making a fully realized, three dimensional, utterly believable time and place.

While the atmosphere and vivid description of medieval life may be enormously compelling, it must be said that characterization occasionally suffers for it: rich interior lives are granted to few, and too many characters are starkly drawn with no shades of gray – this is not to undersell the novel’s power, or diminish Follet’s achievement, just to observe that in its simple depiction of character lies something of the book’s appeal.  For example, Waleran is seen as a corrupt churchman who thinks his view is God’s will and therefore justifies whatever he does, and he stays this way from beginning to just about the last pages – but contrast that against Rowling’s detestable Master of Potions, Snape, who becomes progressively more humanized over the series. 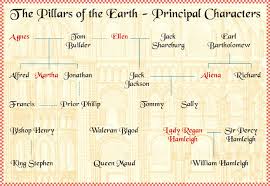 Pillars was envisaged after the success of Follett’s gripping spy novel Eye of the Needle – he began to get interested in medieval construction, the history of the time, and worked on this private pet project on and off for the next decade and more.  Published with snooty condescension by publishers who themselves barely believed in it, it was a book whose sales were modest at first, and then steadily increased over the years, until, as Follet realized, it was outselling every other book he had ever written by two to one. And this was without any kind of serious marketing, mind you, but by word of mouth.  As someone who recommended this book to Curt five years ago and seen it spread by him and others to another fifteen to twenty people, I can testify to its somewhat amazing tenacity…once you pick this tome up, it really is rather difficult to lay it aside.

In summary, Pillars remains one of those great, long, readable novels that affords great enjoyment to any who make it to the end (as Oprah belatedly found out). Readers swear by it; Liquorature dissected it for three straight hours (and that’s saying something); it has a little bit of something for anyone except a sci-fi fan. A sequel has been written which while good, lacked the startling originality of this one – it is, perhaps, the toughest act to follow, a book that remains at once romantic, brutal, simple, complex, vivid and accurate.  And one of the most enjoyable reads you’ll ever have.

One Response to “The Pillars of the Earth”