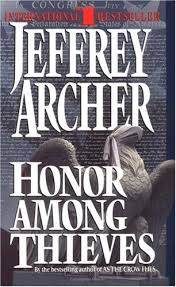 “Honour Among Thieves” is a fluffy 1993 offering from Jeffrey Archer, the author of such bestsellers as “Kane and Abel” and “First Among Equals.” In structure it conforms to the basic heist/spy thriller, with a few twists and turns thrown in, some international flavour, spies, and a fair bit of research on the Declaration of Independence and matters surrounding it. The entire plot and its various twists hinges around purported errors in the spelling of certain words in the text of that famed document.

The plot concerns a plan by Saddam Hussein to steal the Declaration from its location in Washington, keep the theft secret by replacing the original with a forgery, and then publicly destroy the original in an effort to humiliate the new President Clinton (for the historically challenged, this was when the US was still riding high on the heels of the coalition’s crushing defeat of Iraq in Desert Storm two years earlier).  A band of villains is assembled, the dastardly deed is done, and then the second part of the book is about the effort to ensure the Declaration is stolen back.

The cast of characters is the usual varied set: a beautiful Mossad agent on a mission of revenge; a Yale Law Professor who is an analyst at CIA and wants to be a field agent; an Irish forger in love with his Guinness; Saddam and his cabinet, suitably ruthless and ghoulish; a mafia don and his son; weak officials and plotting bureaucrats, a lethal assassin with no real purpose, and various intelligence officials and soldiers of stern brows and unflinching miens. All weave in and out of each other’s space to race to the novel’s conclusion defined (as was “A Matter of Honour”) by a tight deadline which supposedly ratchets up the tension.

I’m a sucker for books that teach me something in an entertaining way (the way “First Among Equals” did about the British parliamentary system, or “The Prodigal Daughter” for the US political scene). Unfortunately, that’s not enough to save this one. Characters are pasteboard stereotypes, dialogue is sloppy (and derivative of other, earlier and better Archer work) and the most engaging dude on the scene is actually the forger.  The whole book smacks of “good enough”, as if no real effort was put in except to get it in stores in time to cash in on post-Desert Storm euphoria. It’s a yawn-through. It is, to my mind, rather lazy. A good read, you understand, just candy floss, and like candy floss, it leaves you hungry for something more nourishing five minutes later.

Jeffrey Archer has had a fairly chequered career: he was a MP in Britain, elevated to the Lords on the basis of his charity work and subsequently jailed for perjury in a libel case.  There’s always been an odour of a guy in the make about him (“…he’d bottle your piss to sell it,” Ringo Starr once remarked ) – something not entirely kosher.  Allegations of small dishonesties of word and deed have followed him his entire life.  Even his undeniable literary success has been marred by whispers of heavy editing to make them readable. Be that as it may, he writes books people want to read, and since I have all of them I can attest to the enjoyment I get from his work.  I simply don’t care much for this one, and think it a step down for this prolific author.

If I had to choose, I’d rank “Honour Among Thieves” fairly low on the scale, not just of Archer’s work, but of spy-cum-action thrillers in general. Archer’s previous novel of international intrigue – “A Matter of Honour” – was more original and better scripted, all of Archer’s short stories are tighter and more cleverly constructed (especially “A Twist in the Tale”) and both “As the Crow Flies” and “Kane & Abel” were more epic in scope. If you want to read a meatier post-Iraq-war spy thriller, try Forsythe’s “Fist of God.” For a better mideast spy thriller period, give “Triple” by Ken Follett a shot. A flawed hero, mideast tension, theft of nuclear fuel, drama and rescue on the high seas…now there’s a situation and a set of people I could give a damn about.

4 Responses to “Honour Among Thieves”