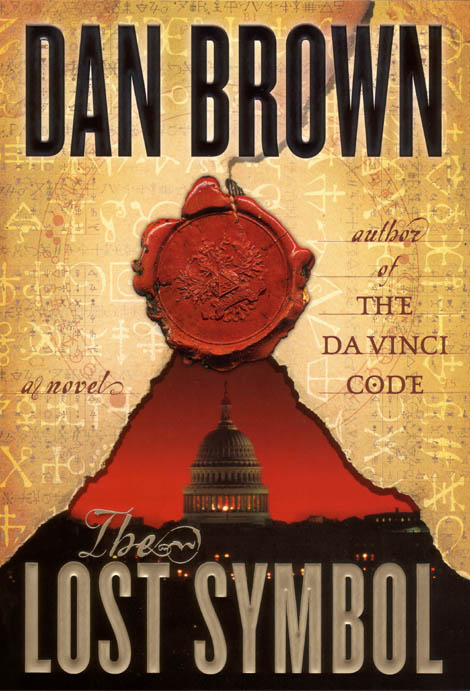 Dan Brown’s “The Lost Symbol” seeks to mine the same territory as his previous megahits “The Da Vinci Code” and “Angels and Demons” (the latter of which I thought was more successful on any level, but never mind). I’d say it fails, for all its fascination to some, and it’s unquestioned readability.

This is not through any weakness in the storytelling, such as it is, or even the concept. For me, it’s simply a case of too much in the same way, and I’ve never been one to find three glasses of wine more delicious than one. Ever since “Digital Fortress”, Brown mapped out his potboiler style, and never really deviated from it since, and now it’s just old, and fails to do much for me.

Consider the template: a startling premise; an expert brought in; a murder most foul or crime most dastardly gets things going; a deadline (sometimes even with the red digital readout counting down to zero) before some unimaginable disaster strikes; a race against time through meticulously researched geography; an Obi-Wan figure who may or may not be good, and a purported villain who may or may not be bad, mixed up with a henchman who’s all bad even though he always thinks he’s doing good. Sexy sidekick of either gender. Short snappy chapters that ratchet up the tension, and all resolved in a startling fashion in the last pages. Dialogue is there just to hurtle from one point to the next and provide some historical backdrop.

This technique worked well when the concept was still new for Brown (it’s not new from a literary standpoint) — and because he absolutely knew what he was writing about and joyfully mixed it up with plausible historical matters that had wide-ranging appeal to conspiracy theorists, religious folks and the average layman, his books sold in the millions. But by now, “The Lost Symbol” is like Crichton following up “Jurassic Park” with “The Lost World.” More of the same, just as commercial, but less compelling. Yawn.

In this version, Robert Langdon, the Harvard professor of Symbology (there is no such position at Harvard, by the way), is called to Washington DC by an old friend named Peter Solomon (hint hint), and realizes he has been lured there to find (what else?) a great secret planted by (who else?) a secret society of founding elders who laid clues in (where else?) the layout of the city that would allow an initiate to the mysteries to unravel powerful and esoteric knowledge considered too advanced to share with anyone not an initiate. At the same time Solomon’s sister, who has been delving into Noetic science (not considered a serious scientific discipline as far as I can tell, however interesting the concept is) has made breakthroughs that perhaps impinge upon Langdon’s quest, they get together in a race against time to solve the riddle, find the secret, locate the brother and…well, who cares? We’ve been here before.

Don’t get me wrong. I find Brown’s research impeccable. For example, years ago I read “Holy Blood, Holy Grail,” which was one of the cornerstones upon which Brown built “The Da Vinci Code” (didn’t buy into it, but look how well Brown integrated it into a plausible interpretation, and who is to say he’s wrong?), and I’ve appreciated that in both “Angels” and ”Da Vinci”, he uses real history, real buildings and real geography to lend that air of verisimilitude upon which his protagonist’s quest hangs. And I certainly have no issues with his bending history and science a little to create alternative view, even if it is rife with conspiracy nonsense – all part of the game of writing a page turning chase novel.

The book, for all its informative nature, is, for me, just an exhausting read. It’s like being on a roller coaster careening all over the place, and by the end point it’s like I’m on a sugar high. It’s all about chase and hype and conspiracy, never about character development. I don’t give a damn about Langdon, whose most human touch is actually his watch and his fear of spaces and heights, or his sidekick or anyone else. I could make the case that his best characters are usually the bad guys, but even these are so one-dimensional that I’m left cold. I simply don’t care. And that sinks the novel for me. Aren’t writers supposed to develop and stretch their craft a little, vary in style, add new touches, go for the fences in tone and style and execution, instead of being the same all the time and merely varying the details?

I read for many reasons, and there is certainly time for breakneck page-tuners, as there is for non-fiction, or dreamier, stately novels that never seem to go anywhere, or a good horror story, short novel, poetry, Shakespeare or what have you. After a few of Dan Brown’s novels, though, I’m about done with his style – it’s too exhausting. So while I’d give him marks for history, fact, interpretation, red herrings, and verisimilitude, I’d award a fail for its lack of ability to make me enthusiastic about any of it. Five minutes after finishing, I’m hungry for more nourishing fare, and therefore this novel, to me, qualifies as nothing else so much as the literary equivalent of junk food.

One Response to “The Lost Symbol”