REVIEWS AND... » OTHER BOOK REVIEWS » FICTION » Watership Down
Add comments 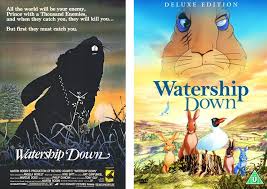 It’s a curiosity of Watership Down that everyone who has ever read it (at least, those I have met) seems to believe it is a discovery all his or her own. People get this look in their eye when the book comes up: it’s like they are welcoming you into a secret brotherhood or something.  There are a few books like that: they’ve dropped out of sight, but their adherents revere them and reread them, constantly.

Watership Down was published in the UK 1972 and has faded from public view, I think, though Stephen King has mentioned it more than once in his novels.  Like Rowling and Tolkien, two other British writers who had a good grounding in classical literature and who were inspired by tales they told their children, Richard Adams based it on stories he related to his daughters, and thirteen publishers rejected it before it was finally picked up by a small house too poor to even pay him an advance.

Plot wise, this one is at heart deceptively simple: a young and undersized rabbit called Fiver foresees the destruction of the Sandleford warren, and he and his brother Hazel, together with several other rabbits, against the Chief Rabbit’s orders, escape to find another home, safe from The Thousand (enemies). The first third of the book chronicles their journey to Watership Down, and then the second describes their search for food sources and mates to establish their colony as viable…and how they run into Efrafa. The third describes the infiltration of, and war with, that warren

Given its length (500 pages of dense, closely-set typeset) and subject matter (rabbits), it’s not surprising how little appreciated Watership Down is, these days: but let me dispel any doubts right here: it is a cracking read, a wonderful, magical tale, a thoughtful meditation on character and society, and a rip-roaring adventure story…one of those books that cannot be clearly defined in any particular genre: it is in turns heroic fantasy, naturalist, religious, adventure, mythological, odyssey and Greek tragedy.

It explores themes of exile, survival, heroism, community and political life. It mixes elements of social commentary with models of social systems themselves, from the tightly run but slipping Sandleford warren, to the shudderingly creepy home of Silver and his fat poets, to the casual life of Watership Down, and the brilliantly depicted dictatorship of Efrafa under General Woundwort.

Like many great novels, Watership Down takes us out of our world, and locates us somewhere new, yet tantalizingly familiar (another facet it shares with Middle Earth, or Hogwarts): in this case into the lives of rabbits. Richard Adams researched rabbit life deeply, but the strength of his creation is revealed in the way they speak, in the way they see humans, in the rabbit mythology and customs and all the practices of daily life: feeding, breeding, elimination, foraging. These rabbits have a vocabulary all their own (“owsla”, or police/army rabbits; “hruhdudu” – tractor; The Thousand; and so on).  They have a body of myth and legend, a legendary hero (El Ahrairah, the trickster) hearkening to man’s earliest tales, and more, all the dissensions, problems and arguments of humans, as projected through the lens of lapine life.

The language should also come in for comment; for while the book starts slowly, and the journey to Watership Down takes its time, I challenge any reader not to squirm at the craziness of Silver’s warren, and their odes to the shining wire; not to hold their breath when Bigwig enters Efrafa (the tension in that section is well nigh unbearable); and not to feel their blood pounding in the Last Battle.  Just listen to this: “Word went out that the…feared owsla had been cut to pieces on Watership Down…and then the Thousand closed in.” And the epilogue, where Hazel dies, is nothing short of masterful.

It is my feeling that Watership Down could not have been published in the US (as I note above, it was barely accepted in the UK).  It is too lengthy for a children’s book, too wordy for most adults, has too many passages declaiming the idyllic countryside of England.  My own opinion is that it is one of the great novels of our time, transcending its seeming commonplace subject matter.

Fairness makes me note that some critics have found fault with certain themes of Adams’s novel.  It has been considered sexist in its depiction of bucks and does (at odds with the reality of rabbit life), and the somewhat ruthless search for mates after the victory of finding Watership down came in for criticism; the book has been dismissed as a mere adventure story celebrating male camaraderie (Adams had been a soldier in WW2 which may have had an influence). I don’t share these problems, but acknowledge they exist.

The thing is, the overall narrative structure and strongly written passages rise above such matters. We read too much crap in our day and age. Hardly anyone reads classical literature these days, to their detriment.  We are inundated with fingernail parings of rapturously received prose (like “Vox”), experimental literature, Booker Prize winners that no normal person can parse without getting a headache, while truly ambitious and large-themed novels of power and scope are somehow sneered at and spat upon for not being 100% politically correct.

Here’s something that’s not short, doesn’t pander or condescend to you, and is what it is. It rewards those who finish it, and I dare say, who reread it. It’s a plump, well-boned, meaty tale of great passion, and when you’ve put this one down, you know, without a doubt, that you’ve really read a novel.

3 Responses to “Watership Down”