REVIEWS AND... » OTHER BOOK REVIEWS » FICTION » The First Chronicles of Thomas Covenant the Unbeliever
Add comments 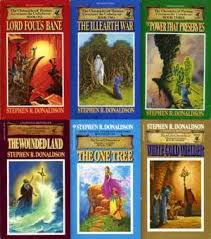 Every fantasy writer who writes in multiplicate is haunted by Tolkien’s ur-saga. Tolkien’s influence is so pervasive that it takes real effort not to write about sylvan elves, a world of incomparable majesty no longer extant, fierce battles with dark foes, and the one great enemy who must be defeated (with or without the numinous object). Sagas that take a different tack don’t always fail, but they ring discordantly, somehow – so deeply has the Lord of the Rings seeped into our mental imagining of the fantasy world.

Of the many multilogies (my word) that have been written at right angles to Tolkien, a few stand out: Robert Jordan’s epic and highly overwritten 11- or 12-novel cycle of the Wheel of Time; Ursula LeGuion’s Earthsea quartet is intriguing; Piers Anthony’s Xanth novels are punny, funny and clever, but not really serious as his equally different Incarnations of Immortality; Dragonlance has its adherents (I am not one of them, but the series should be noted); the Conan series succeeds on its own terms and is not really either a series of novels or fantasy at all, but it does conform to many stereotypes of fantasy and so I bring it up; Terry Goodkind’s “Wizard’s First Rule” took the genre in a different direction, but not really that original when its underlying structure is exposed; The Belgariad by David and Leigh Eddings moved fantasy away from its dread serious underpinnings and was a lighthearted foray with serious overtones; the Fionavar Tapestry by Guy Gavriel Kaye is in a class by itself based solely on emotional heft…and then there are the Chronicles of Thomas Covenant the Unbeliever

In my mind, masterful title aside, Thomas Covenant stands aside from most fantasy heroes by being the diametrical opposite of all of them: he’s an antihero, unapologetically so, and carries this front and center…and not once in the entire First Chronicles does he really change in one unshakeable belief: that he is real and the Land in which he is deposited, is not, and therefore he does not have to do anything “right”, take action of any kind, or take part in anyting at all. In fact, he is absolutely convinced that the Land is an illusion created by his unconscious mind to retreat from the reality of his leprosy.

But I get ahead of myself. The three books of the First Chronicles are called (in order) Lord Foul’s Bane, The Illearth War and The Power that Preserves (there are three others of the Second Chronicles which I won’t discuss here). In each book, Thomas Covenant is transported to a powerfully natural world called The Land, and in each he must somehow find a way to navigate between his beliefs and his senses.  In each, his arch enemy Lord Foul is stronger, and the citizens of the Land are weaker, lesser and more defeated. Foul’s ultimate ambition is to break the arch of time so he can once again emerge into the Universe, freed from the bindings of the Land, but to do so he needs Covenant to use the white magic of his ring…freely. All comes together in the Power that Preserves.  As he was in the first two novels, Covenant is summoned ot the Land, which is in the grip of a terrible winter.  Revelstoke is besieged by Foul’s armies. Old allies are long dead and somehow Covenant must find a way, with his friend the giant, to confront Lord Foul and create some kind of victory, even though he still does not know how to control the power of his white ring.

In between all these titanic events are interspersed characters of complexity and variety: the Bloodguard, immortal warriors who use no weapons; the Lord of Revelstoke; the Giants of Seareach, immune to fire; ur-viles, the great horses Rhanhyn, the various artisans who work with stone or wood or other materials by shaping the Earthpoower within. And, of course, the ultimate enemy, Lord Foul, Fangthane, the Gray Slayer, with plans within plans within plans, and his three terrible servants, the Ravers.

Everything about Covenent is predisposed to the resolution of unresolveable opposites. His white gold ring is a mixture of gold and silver; he believes and does not believe; the poem at the inception calls him “lost and found, mad and sane, and wih one word of…treachery he will save or damn the earth.” His inner struggles to come to grips with where he is and what his should do with the power he possesses (or advise others to) are at the core of the dlimenas he constantly faces in the land and this in many ways elevates the books aove the standard fare and has mad eit into a sort of cult classic. It sure as hell is not for the casual reader who is looking for a fe days of light diversion into fantasy.

I’ve never read anything before or since that so polarized my thinking as much as The First Chronicles of Thomas Covenant, lent to me years ago by the best friend of my youth, John Lee (long may his five-year-old last). The sin Covenant commits in the first hundred pages horrified me. The vocabulary is dense and polysyllabic (when was the last time you heard of words like “febrile” or “lambent”?).

But somehow the power of the writing and the prose rises above such concerns.  Thomas Covenant is the first of the “real” modern, conflicted characters in fantasy. He not a hero and does more harm than good and yet we identify with him: we may want to be Aragorn or Sparrowhawk or Arthur, kingly knights and heroes of standard mythology, but in Covenant we get only ourselves and all the weaknesses that make us human, but who, in the end, can chose to rise above our flaws: and perform some one great deed of grace, to redeem ourselves in the eyes of all others.

One Response to “The First Chronicles of Thomas Covenant the Unbeliever”